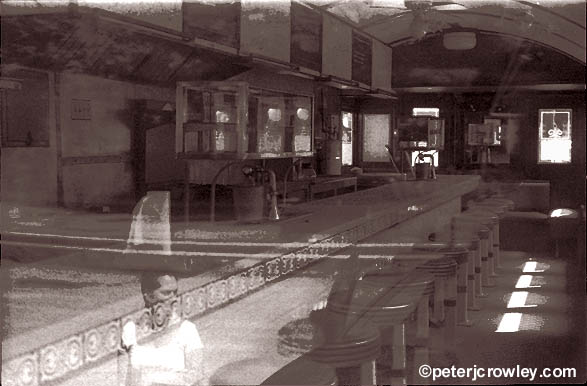 From the General Store to the soda fountain, lunch counter, diner, coffee has been a socializing lubricant. The diner with white cups and stools that spun. Plans and dreams also spun to people you spoke with daily.
Paper cups, corporate coffees answer to cluster bomb advertising litter! Travel mugs and cup holders drive through, tell the clown what you want “scratch $2.05 plessee pull forward to the window” Little chance to smell the beans, let alone linger, converse. Anything more than “How are you? Fine” is wasted billable hours. Thank you? less than half of the time. Hell you are late for your second job so you can keep up the payments on your “I-personality” You got the Vanilla one but, word is that in a month an upgrade to “Ultra Vanilla-smooth personality ” will be available. Maybe you can get some overtime so you can first in line for this one?
Small business doesn’t have associates, isn’t funded by a line item on a senate bill to send more aid to Exxon/Mobil. Small business is funded by you making a decision to keep the American Dream alive. Look forward and look back but don’t forget to see what is right in front of you. The text message is on the wall your humanity is past due. enjoy pjc