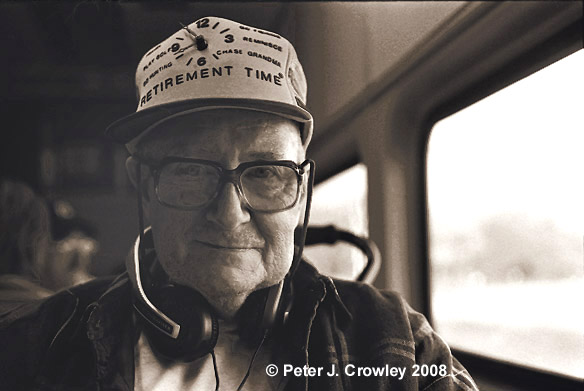 August 27th 6:30am somewhere between Chicago and Erie I join this 72 year old train buff for coffee. He has been taking the train for travel most of his life and has been on almost every route Amtrak offers. Fully immersed in the culture of the rails yet still with a child like fascination of all that presents itself through the window. The clock on his hat works which I think is cool. We talk seeking similarities, finding he grew up in Connecticut and worked for The Bridgeport Post and other prints shops. Retired to Az. he is on his way to a sixty year reunion of workers from a YMCA camp. What a different look at relationships forged in the middle of the last century to relationships of today. Friendships nurtured over decades, working for the same company for your entire career. From seed to sapling to giant Oak drawing strength from your neighbors who’s parents were the Oaks that have lived next to you for generations. No genetically engineered acorns here just a forest of humanity sharing the the seasons of life. 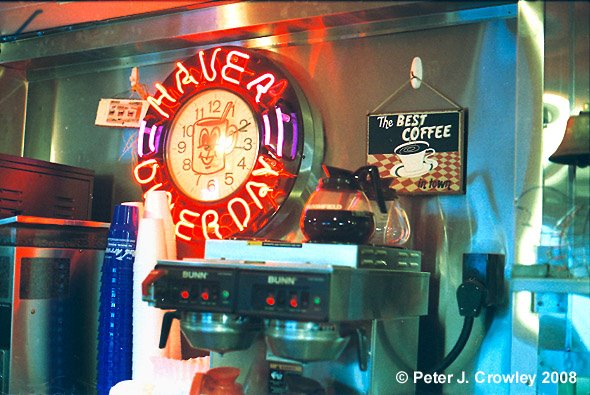 December first I was back in Manchester New Hampshire to pick up work from The Darkroom Gallery. Last time it was Rita Mae’s for lunch, this trip we went to The Red Arrow Diner where the food was grand and the ambiance heartened you back to the middle of the last century when the The Diner was king. No placing your order to the plastic clown as you drove through, no here you spoke with a waitress who could suggest what you may like and still have room for a huge piece of pie. There is neon, Naugahyde stools to spin on shinny steal walls. The Red Arrow is a visual time machine for this artist whose work is very reflective, comparative to then and now, perhaps a bit romantic. Well maybe it is the end of the year or the snowy afternoon but a little pondering of life’s choices and the speed of today vs contemplation of the past, hope you enjoyed today’s passionate observations. enjoy pjc