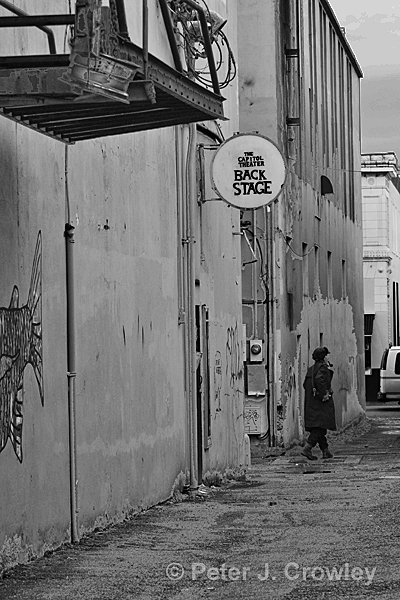 Today’s stroll was a B+W world. I continue to learn/teach learn camera and teach camera to do what I want. I like to work front end composition that is compose in the view finder not in post process. Rees a fellow art photographer had once suggested to use a Red filter when trying to get B+W from digital. This is a film thing for adding more contrast. We have both found that digital B+W is a little flat the medium expects you to fix this in post process. Well I still want to do image on the front end in camera not in the digital darkroom. This is how I worked with film. When I would load a roll of film I would select a developer before exposing deciding at the beginning what contrast I wanted from this roll. Adjustments were made by use of filters low contrast situations, shoot with yellow, orange, red to pick up contrast. In the darkroom just a change of paper grade. Now it helped that I had a couple bodies so I could go out to shoot and have a camera loaded with a low ISO film [100] which is more contrasty, and a faster film [400] which wasn’t as contrasty each shot with a dedicated developer for optimum results. How to do this in digital is what I want to learn and teach my camera what I want. The mode I use is Manual the image made is mine not the Mode set by the camera so my images will be exposed the way the focus group average determined. So a brief rant on individual creativity. No programs here. peace pjc